Spray Foam Insulation in the Attic Floor (Vented Attic Spaces)
The method of use for spray foam in the attic is often dictated by the building science and design principles your architect and/or builder subscribes to. In a traditional vented attic, insulation is used on the attic floor to insulate the ceiling from the seasonal heat and/or cold. Spray foam is used where traditional fiberglass batts, or cellulose is used; between the floor joists. The rest of the attic is left un-insulated and highly vented through gable, soffit, and ridge vents in the roof structure. This type of engineered system is the most common throughout the US, but may not be the most effective.

Spray Foam Insulation in the Attic Floor (Non-Vented Attic Spaces)
In this application, considered the most effective, by most of the SPF industry, the foam is sprayed directly to the underside of the roof between the joists, down around the rim and into the soffit areas, on the gable wall ends, and effectively sealing off and insulating the entire attic space from any air infiltration. By now you have probably heard of this procedure with terms like: “Hot Roof design”, Unvented Attic, Conditioned Attic, or “The Insulated Envelope.” I use the term “Unvented Attic.” 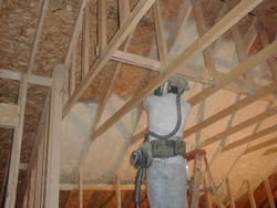 The traditional practice of insulating the underside of the roof in the attic has raised much debate in the building industry because “standard” roofing and design techniques call for the attic to be ventilated in order to reduce moisture problems and heat build-up in the hot summer months.

However, a vented attic situation will become approximately 130-140 degrees in the summer. There’s no reason for your air-conditioning and vent-ductwork to have to work in that type of severe conditions. There is also opportunity for moisture to form due to condensation on these appliances.

By applying spray foam directly to the underside of the roof deck, it now insulates the attic space from the extreme heat that once radiated thorough the hot shingles sheathing and roof. The severe temperatures no longer exist in the attic. In short, the attic now becomes a passively “conditioned” space of the house that is just as comfortable as any other room in the home. Some builders and designers will tell you that this system is no good because wood needs to breathe and that the shingles on your roof will now overheat, get too hot and curl off. Not true.

We have done a great deal of research on the “breathing wood” issue and have found that most furniture manufactures actually kiln dry wood before use. They claim that if any wood is permitted to “breathe” this adds to deterioration over time. Kiln dry wood, used in all furniture, contains a small amount of moisture. If that moisture continues to dry out you will start to see cracks and splits. They take extra precautions to make sure that wood is sealed completely. Wood must be totally sealed. Properly finished and maintained furniture will not have this problem. Perhaps this is why we paint our house, and our fences, and everything else. I put up a fence a few years ago, left it to breathe, and now it is falling down because it is rotten. So much for breathing wood…

I recently met with an ELK Premium Building Products rep at a trade show last year, and they claimed their shingles have no problems whatsoever being used over an un-vented roof deck. CertainTeed Building Corp. now says the same thing. So much for curling shingles…

A roof system insulated with spray foam reduces energy several ways. Energy loss from ducts located in the attic is essentially eliminated. The top of the building is much tighter resulting in less infiltration and exfiltration, so excess moisture isn’t pulled into the attic. Infiltration through the ceiling is also reduced. In addition, the attic temperature is remarkably lower, which further reduces energy loads.

In a standard insulation system, ceiling insulation reduces the transfer of heat from the attic to the living space (in the summer). Attic temperatures can often approach 140°F during the day. Most of this heat enters the attic space through a multi-step process. First, solar energy warms the shingles and sheathing. The hot sheathing then transfers heat to the rest of the attic through conduction, convection and radiant heat transfer. The 140°F temperature of the underside roof surface drives the heat transfer process.

The benefits of insulating attic space are: